While ion transport in solid polymer electrolytes (SPEs) has been explored for decades, there still remains controversies about its fundamental properties, often correlated with gaps between experimental and computational studies. Using molecular dynamics simulations to understand the complex transport mechanisms and also to fill these gaps is the main goal of this thesis. This is achieved by critically examining the relationships between different properties in SPE systems: polarity, coordination, ion-pairing, and ion-ion correlations, which highly influence the ionic transport mechanism.

Firstly, the relation between polarity, ion-pairing, and ion-ion correlations was explored. The solvent polarity (εp) of poly(ethylene oxide) (PEO) doped with LiTFSI system is modulated using a charge scaling method. When separating the effects of solvent polarity and glass transition temperature, a maximum in the Li-ion diffusion coefficient with respect to εp is observed. This is attributed to the transitions in the transport mechanisms and an optimal solvating ability of Li-ion at intermediate values of εp. The solvent polarity also plays a critical role in the formation of charge-neutral ion pairs, which is commonly considered detrimental for ionic conductivity. The relation between cation−anion distinct conductivity and the lifetime of ion pairs was thereby examined, where it is found that short-lived ion pairs actually contribute positively to the ionic conductivity. Moreover, the origins of the recently observed negative transference numbers were scrutinized. A strong dependence of the reference frame in the estimation of the transference numbers is found, which explains observed differences between experiments and computations.

Secondly, the role of coordination chemistry and its influence on ion transport mechanisms and conduction properties in SPEs was studied. The change in the cation coordination with both polymers and anions was used to study the dominant transport mechanisms at different molecular weights and salt concentrations for PEO and a polyester-based SPE, which shows that essentially very little true hopping occurs in these materials. In this context, the coordination and ionic transport properties of three resemblant carbonyl-coordinating polymers are also investigated: polyketones, polyesters, and polycarbonates. The extra main-chain oxygens for the latter polymers are shown to decrease the electrostatic energy between Li-ion and the carbonyl group, and the cationic transference numbers are thus found to be increasing as the coordination strength decrease. 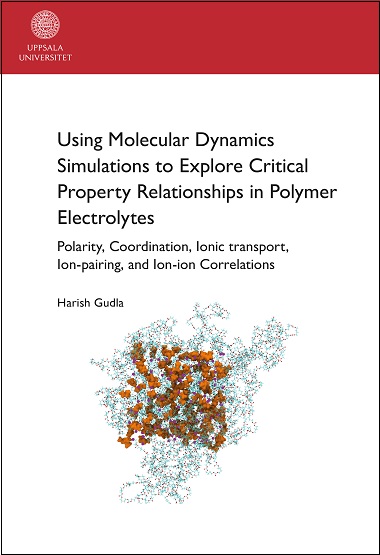