This thesis explores the design of metallic coatings for corrosion protection. The subject of the study was the new class of materials multicomponent alloys (MCAs, also known as high entropy alloys). They consist of near-equal concentrations of many (four or more) metals and are often reported to form a single phase with a simple crystal structure. Due to the complexity and range of possible MCA compositions, there is a need for design principles as guidelines for how the alloying elements can be chosen and combined. This work aimed at finding such principles through the systematic study of the synthesis and properties of three MCA systems. Their compositions were carefully chosen to answer fundamental questions about the materials class and the synthesis method and to generate conclusions that could be generalized to a larger group of MCAs. All three systems were based on the elements Cr, Fe, and Ni, and can therefore be considered an extension of stainless steels.

The first alloy was CoCrFeMnNi, which is well-known as a single-phase bulk MCA. A systematic exploration of the synthesis parameters showed that there are fundamental differences in the phase formation of CoCrFeMnNi through magnetron sputtering compared to typical bulk synthesis. Literature studies revealed that this conclusion can be generalized; single-phase MCAs should not necessarily be expected from magnetron sputtering. It was also shown that the choice of substrate and even the crystal orientation of the individual substrate grains strongly influenced the outcomes of synthesis, including the phase formation, growth rate, morphology, and the formation of stacking fault structures.

Two novel alloy systems were also explored: CrFeNiTa and CrFeNiW. Ta and W were added to achieve an alloy with higher corrosion resistance than stainless steels and more generally, to examine the interplay between passivating elements in MCAs during corrosion. Based on geometrical considerations, it was predicted that equal amounts of Ta and W would be needed to protect alloys from corroding (less than 20 at%). It was found that the prediction was only valid for the CrFeNiTa alloy system. The reason behind this was explored and a new criterion was then proposed: In an MCA, each passivating element should have similar electrochemical nobility.

Further design possibilities were demonstrated by adding up to 50 at% carbon to the alloys. Thermodynamic calculations predicted decomposition into multiple metallic and carbide phases. However, the limited diffusion during magnetron sputtering suppressed the segregation. At lower carbon contents, the carbon-containing alloys were single-phase and amorphous. At higher carbon contents they formed alloy/amorphous carbon nanocomposites. The addition of carbon made the alloys stronger, more corrosion resistant, and more crack resistant. 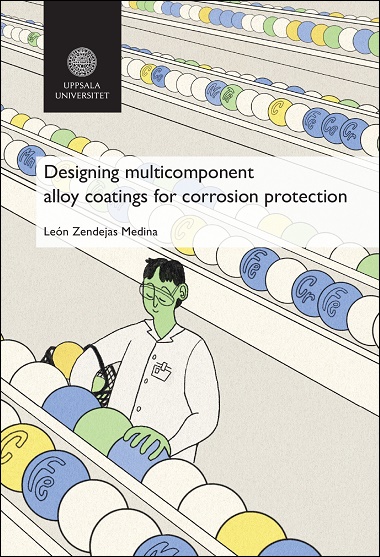